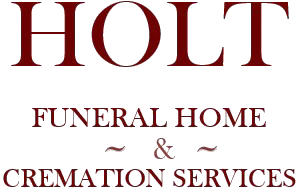 About Us
|
Our Staff
|
Our Facility
|
Contact Us
|
Why Choose Us
|
In Memoriam of Howard R. Holt
|
Testimonials

Holt Funeral Home is committed to providing the highest levels of personalized service, professionalism, integrity and care to the families we are privileged to serve each day.

As such, our team is dedicated to providing you and your family with services – before, during and after a death – that are designed to assist you in your travels along the journey of grief. Our team of professionals are here to listen compassionately and to provide experienced guidance throughout this process.

We understand that every family is unique and as such your needs are also unique. With over 85 years of experience helping families, our team of professionals are well equipped to meet your needs to ensure your expectations are not only met, but exceeded – before, during and after the funeral. We always welcome feedback as we strive to provide the highest standards of personal care and service to all in our community as they honor the life of their loved ones.

Curtis J. Holt’s Sons was established in 1930 by Wallace S. Holt. A storefront operation in the North End soon shifted to the family’s home on Rockland Avenue. It was then that the longtime partnership with his brother, Randolph C. Holt had developed. In 1935, a third brother, Howard M. Holt, joined them. In 1943, the present location was purchased. It is the original Victorian mansion of Frederick Harris, of the Harris and Mowry Department Store. Dedicated to serving their community, the primarily protestant firm grew stronger and more firmly embedded in the city’s landscape.

In 1956, Wallace’s son, Howard R. Holt, entered the family business and helped to develop the reputation it still enjoys today. Facing the challenges of social and industrial growth in the area, Howard devoted over 45 years to creating the standards of excellence that transcended the social barriers and elevated the firm to the unique position of leading ecumenical funeral home of Woonsocket.

In 1987, Cynthia Noble joined the firm and in 1992 purchased the business from the Holt family. Over 30 years, the Holt Funeral Home has grown in numerous ways. In 1996, there was an expansion of the facility, which included a large viewing room in order to meet the needs of the increased number of families served. In 2004, Cindi married Jim Gallagher and together they worked tirelessly to maintain the same standards of excellence that the Holt Funeral Home is known for.

As volume of business continued to increase, the Holt Funeral Home required additional Funeral Directors and staff to provide our community, a compassionate, young and energetic team. In 2015, Cindi developed an Aftercare program, establishing a complete and well rounded, full service funeral home. Today, as an owner-operated firm, it appears the transitions were seamless. 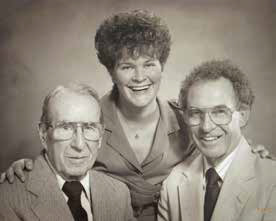 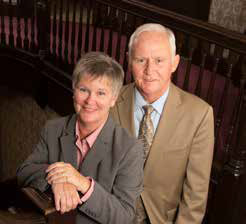 History of the Kilcline Funeral Home

The Kilcline Funeral Home was established in 1929 by Bernard A. Kilcline. In 1940, Bernie was joined in the business by his younger brother, Bill, who later took over the business when Bernie retired in 1963. Upon his graduation from the New England Institute of Anatomy in 1968, Bill’s son, Bill Jr., joined the business after serving 12 years as a Navy Radioman. Bill Sr. retired in 1973. 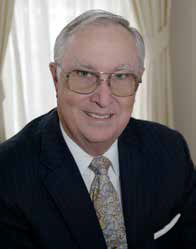 In 1992 Bill’s son, Kevin, continued the family tradition and joined the firm. Bill Jr. retired at the close of the millennium in December of 2000.

In September 2005, after 76 years of serving Woonsocket, the Kilcline Funeral Home closed its’ doors due to a devastating fire. Cynthia Noble and James Gallagher have taken over the business and the Holt Funeral Home is now maintaining all records and honoring the pre-arrangements.